WHAT IS THE STRONG DELUSION?  In short what do the see-ers see that others do not. 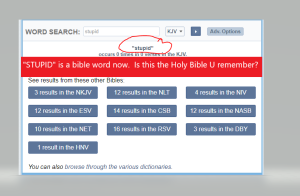 The See-ers recognize blasphemy in bibles.  And they remember the holy bible before the desecration of the Holy place.  Desolation.  We see the Amos 8:11&12.  Famine of God’s words.  For it is hidden by the strong delusion.  And the tower of babel rose.

The seer wants the whole world to see and it never will, it just chooses not to.

Could you look at an unexplainable miracle?  No of course you could not.   Or at least most could not. People see by their preconceived notions of emotional programming.  PERIOD.  In most cases the adults childhood controls their perceptions of Truth.  That’s right.  And the programs set in place when you were a babe are no play toys.  They are powerful and deceptive changing men into what the program demands.

What we see is all in prophecy mapped out explicitly.  However the preachers skewed the interpretation by interpreting “The Holy Place” as a temple.  A temple could be a second meaning.  Judaism is a religion/legion and they are many (religious demons).

“Oh no not me!  I am exactly who I choose to be!” says the programmed child of Hell.  The goat who has no idea what his heart is saying to him.  He no longer hears the voice within.  The still & quiet voice was silenced long ago.

Its not their fault!  The programming is incessant!  How can anyone break out of it to see clearly what is in front of them?  But more urgently how will they ever see what is inside them if they do not deprogram from the system?  I can give them truth all day long and they will laugh in my face thinking “me programed?  That’s just not possible!

Nevertheless I write.  How did I deprogram?  By therapy, working the 12 steps many times, and by God’s belt of Truth.  Without the spiritual armor no man (mankind) will be able to stand against the deception.

Mandela effects –are signs and wonders from God.  They are changes to reality and to our very timeline.  What was, now, was not and never was though we, many of us remember it.  Example- “Mirror mirror on the wall whose the fairest of them all?”  Never existed in any movie or vcr tape or dvd.  Checkit.

The covenant with many is a deal made between demons and powerful men.  The deal?  Demon supplies the golden keys to the humN sell’s nuke so powerful men can convert mankind into a perfect slave race.  And in return the man agrees with powerful demons to change the words/precepts/dialect/punctuation/grammar/names/places/etc. in all bibles old and new code and paper text and print one and ALL.  Of course this requires magic that apparently somebody has access to.

Changing reality and a fluid bible  (changing timelines and laws of nature.)

Its demons not angels who are causing evil to rein in this reality.  Someone sent a strong delusion to cover up all these things I mentioned above.  Why?  Perhaps if men saw miracles as we the few have seen and continue to see they would fall apart.  Or perhaps they would seek God with their whole heart and be saved from Death and Hell.  We do not believe that God sent the strong delusion. Why?  Because desperation makes men seek God.  And seeing the supernatural in real time would cause many to be saved.  Furthermore kaos would ensue if the many could see what the few see.  But we don’t think that kaos is the reason that the bible changes are covered by the strong delusion.

What exactly is happening to the bibles?

The bibles held much Truth within.  Many were saved by reading God’s words.  Mysteries were revealed in the books.  The prophecy of the desecration of the holy place is fulfilled.  God gave prophecy that there would be a famine of His words in the end of days.  It’s here.  You and others just can’t see it.

When the many read the bibles the Christians see only what is holy.  It’s pretty miraculous.  While we the few see lies, insults, slights toward man and God, and an end to God’s holy precepts in the books.  We see the near desolation of the Holy place.

Look up “Supernatural Bible Changes“.   Or “mandela effect“.  You will see debunk articles galore and if you keep looking you will see proof of the desecration of the holy place.  But its likely you will not remember the holy bible as it was before the desecration.  Somehow someone has wiped the memories of it from most minds.

The bible now desecrated is one of the worst idols on Earth.  Men call it by God’s Son’s holy name making the book “the word of God” and it is not.  NEVER WAS. We were wrong to ever call it such.   It was however God’s words.  But not now.  Even the scriptures that are Truth, left in the bibles are tainted and twisted.  Whoever had to leave some Truth in the books lest all men see the desecration.

And so the prophecy is True.  “His sheep know His voice.”  And “Depart from me I never knew you.”  The precepts the Christians hail as Gods are vile and hateful as is the dialect.  The errors are overwhelming and yet they do not see.

Even those who claim to see are merely placed to steal the narrative of the supernatural bible changes.  Someone is feeding them the changes while they cover up the desecration of God’s precepts by pointing out vile putrid new script.   Well at least they are doing that much for the sake of those who do see.  Though these channels on YT are likely a net.